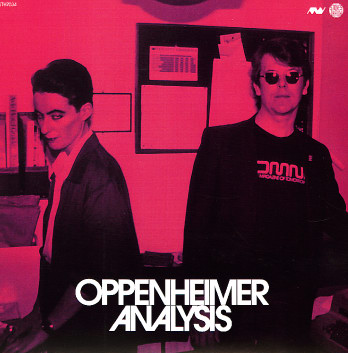 This song does things to me. Oppenheimer Analysis are a duo who formed in London in 1982. Doesn’t seem like they were particularly prolific, but they had a cassette release (LOL) in the early 80’s that you could get at shows. This track ‘Devil’s Dancer’ was re-released on Veronica Vasicka’s label Minimal Wave record label in 2006 I believe. Although don’t quote me on any of these facts. The duo started performing again in 2006 for the first time in 22 years around Europe and the UK and have been playing semi regularly for the last few years even though they’re probably well old by now.

The Minimal Wave label was set up as a tribute to the 80’s electronica/new wave/”minimal” electronic music genres/sound at the time, especially stuff using analog synths, and aims to promote it as well as unearth new music from that time. Vasicka claims to have created the genre name when she set up the blog and record label.

One day I want to create a new music genre, following in the foosteps of Veronica “Minimal Wave” Vasicka” and Carles “Chillwave” Dude From Hipster Runoff. I guess it would have to end in “Wave”. Dubwave? Rave Wave? Lana Del Wave?

Although so much pressure. As Carles says – “Sometimes I get worried about the emerging/emerged genre of ‘chillwave.’ Tons of pressure on me because I ‘invented it.'”

Anyway listen to the damn song.